Reflection on his week of Pilgrimage by Ahmed Nadi

Last February my friend Steph sent me an invitation asking me if I would like to join a long walk with student cross, and said it takes place the week before Easter with a group of Christians and she thought it might interest me. After I read the message I felt so excited but a bit worried because I thought I wasn’t ready for this kind of trip, especially as I have come from a different background and different culture and faith, so I assumed it might be an inappropriate offer to me, but then my curiosity pushed me to see it from a different perspective. I thought it could be a good opportunity to explore new places and live a new experience and it could be a great chance to learn some new words and the English culture so I decided to go. 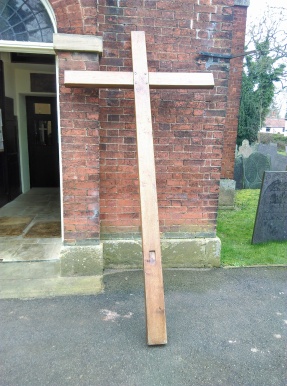 I started the walk on Friday 23rd March with a group of around 18 interesting people. We set out from Keyworth which is a large village of around 7000 population located about 6 miles South-East of Nottingham and we ended in Walsingham where there is a major pilgrimage centre.

Throughout the walk to Walsingham I had many different completely new experiences. I have learned many various things about the countryside and the culture and of course about Christianity and specifically about Easter. I also have met many interesting and exceptional men and women in the same group I’ve walked with or other people I have met on the way. They were very kind and generous and helped me a lot throughout the journey. So I started with people I don’t know but ended with very close friends I will not forget easily.

There are many things I have done for the first time in my life during this week such as I have walked 120 miles or 190km which is a big challenge to myself and I constantly spoke English and no Arabic for ten days and this was also a big challenge, but a very good English practice. I have slept in a sleeping bag for the first time which I don’t think is a good idea if you are moving a lot while you are sleeping. And I have sund many sea shanty songs Some of these I still don’t understand until now!

I have seen a lot of very nice picturesque views of the countryside and very clear skies full of starts at night time and very nice fresh air and full of silence and I have walked through very nice wooded lanes. And I have jumped a lot! I drank a lot of squash and heard a lot of snoring! I have learned lots of new English vocabulary, some of them are really interesting and very useful in everyday life. Such as nature, pilgrimage, hearth, shell, citrus, ignorance is bliss, outskirt, privilege, rambler, snoring.)

At Walsingham I have seen the other groups came together at one place, and there was a lot of different activities happened there. I was a bit confused because of my limited English and it was a big event but I remember the music was marvellous. It was something I heard for the first time. On Saturday there was a very nice party. Everybody was there and started to sing amazing songs until

very late. The next morning there was another walk with the crosses a

round the village and it ended by the afternoon when people started to come back to their homes and so did I.

Of course there were other different things that happened during the walk, I still remember them everyday since I have come back to Birmingham.

We are a pilgrimage View more posts